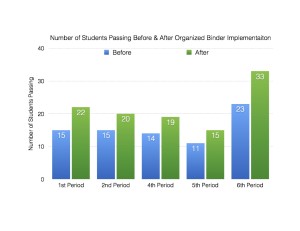 Posted by
Mitch Weathers
on
December 3, 2013

Thanks to veteran Spanish teacher and Organized Binder user Diane Nienhuis for sending us this post,

There is never data collected or calculated for Foreign Language in my district, as far as I know. So I just spent some time collecting my own data and thought I would share what has occurred in my classroom in the 4 weeks and 2 days since I implemented Organized Binder.

The last two years at the school where I formerly taught I adopted Organized Binder. My failure rate dropped from about 45% to 9% after successful implementation.

Two weeks ago I started at a new school in the same city, I simply tried to learn student names, establish procedures, and learn about my new school. At the beginning of the 3rd week, I started using Organized Binder in all of my classes. Here is what happened.

My failure rate dropped by half in just two weeks thanks to Organized Binder! 7% of my students are rarely here which means I cannot help them pass if they are not here.

Just thought I'd pass this along.”